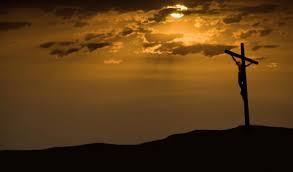 Dear woman, I have chosen the weak to shame the strong.

This is Christ’s message for us today from the cross. Dear woman, I have chosen the weak to shame the strong.

In my mind’s eye, I imagine this scene. Jesus is nailed to the cross, up on the hill. He is nearing death from an agonizing, torturous crucifixion; one of the cruelest forms of the death penalty ever known. At the foot of the cross, keeping vigil, keeping a death watch, are only a handful of folks. Most of Jesus’s followers have betrayed him or abandoned him, leaving only these faithful few behind.

Before he expires, Jesus offers a few final words, including these: “dear woman.”

Let’s hear that moment now from John’s account of the crucifixion.

Dear woman, I have chosen the weak to shame the strong.

Women were no where near an equal gender during Jesus’s time. They were relegated to their households, kept from meaningful engagement in society. Men ruled the house, men ruled the synagogue, men ruled society, and women were to know their place. This came, not surprisingly, from the prevailing wisdom of the day: men were strong, women were weak.

Dear woman, Jesus says, in part because it’s almost only women who are left there at the cross supporting Jesus. The disciples, except for John, are either dead, as in the case of Judas, or in hiding; scattered around Jerusalem and the surrounding countryside out of fear. These strong men, chosen by Jesus to be his disciples, are weak in this crucial moment.

But not so for Mary, the mother of Jesus. Not so for Mary, the sister of Jesus’s step-father Joseph. Not so for Mary Magdalene, the friend of Jesus. These supposedly weak women are strong; for they are there, showing their support of Jesus before his executioners. They are risking their lives and status in society to demonstrate their continued support for Jesus. The disciples, except for John, have all denied Jesus either verbally, as with Peter, or through their cowardly actions in fleeing the scene of this state-sponsored execution.

Here on the cross, at his weakest moment, we know Jesus to be strong. We know that God’s strength often defies the world’s strength and even makes a mockery of it. What appears weak to the world is actually strength; for God chooses the weak to shame the strong, as Paul puts it in 1 Corinthians. There’s no better example of that than the cross.

Dear woman, God chooses the weak to shame the strong.

This reality about women being strong disciples carries over throughout the New Testament. All four gospels agree it’s women who come to the tomb first and discover it empty, demonstrating tremendous courage while the male disciples continue to cower in the upper room. It’s to women that Jesus first appears as the resurrected one. And it’s women who are the first to announce the risen savior, running to that upper room to announce what they had witnessed. Women, dear women, are the first disciples and preachers of the risen Christ.

And according to Luke in the book of Acts, the first disciple of Christ in Europe, and indeed the first pastor in Europe, is Lydia, a wealthy merchant woman who lived in modern day Greece. All the men of Greece fear converting, but not Lydia, who not only converts to Christianity, but recruits new disciples and leads a house church from those recruits. Pastor Lydia is a supposedly weak woman who is, in fact, strong in Christ.

And so, when we submit, weak as it may seem to the world, we become strong; strong like these dear women.

Submit is a nice word, it’s an easy word, it’s one we throw around frequently when it comes to religion. But submission to Christ, both here at the cross and in general, isn’t easy, nor is it without cost. For these women to submit, they have to move past their fear of social rejection. Everyone has rejected Jesus, even his own disciples! They are actively choosing to make themselves social pariahs as they submit to Christ.

Not only that, but they are very recognizable figures. The pharisees and sadducees will remember them there, at the cross, and make sure that they use their power to make these women suffer. These dear women are actively placing a target on their backs as they submit to Christ.

Not only that, but there’s the horror, the terror, of watching their beloved friend, leader, and indeed the man they believe to be God incarnate, die a gruesome death by state-sponsored execution. If they’ll treat Jesus this way, what might they do to his supporters? That question is why the male disciples fled the scene, denied Jesus, and are now in hiding. These dear women also fear of their own deaths and yet still submit to Christ.

Fear of social rejection. Fear of power used against them. Fear of their own deaths for their support of Jesus.

These dear women live in fear. And yet, they choose strength through submission to Jesus. They choose strength by staying steadfastly at Jesus’s side, no matter what might happen as a result. There, at the foot of the cross, they count the cost and decide that Jesus is worth the cost.

Can we say the same about ourselves?

And, in this age of fear, God says to us, male and female alike, “dear woman.” Christ beckons to us, invites us, to submit to him, choosing his strength over the strength of the world; Christ invites us to be just like these dear women.

Let us be reflective on this Good Friday. At the foot of the cross, at the height of fear, do we flee, or do we stay steadfastly by Jesus’s side, through thick and thin, believing, firmly, that Jesus is who he says he is and will give us strength when we feel weak from fear? Do we trust what God is doing in the world, even if all we can see is defeat, loss, and fear?

For the women at the cross, it appeared Jesus had lost, that God had been defeated, and that fear ruled the day. At this moment, at the foot of the cross, these women had no knowledge of the resurrection, they had no Easter Sunday to look forward to. Those things hadn’t arrived yet and there was no assurance that Easter was coming. All they knew was the cross and their feelings of defeat, loss, and especially fear.

When we, like these dear women, only know defeat, loss, and fear, will we seek to live up to their example? Will we choose courage, no matter how weak we may feel? Will we put faith in the words of the Apostle Paul, that God has chosen the weak to shame the strong? Will we believe, without a shadow of doubt, that Jesus is who he says he is, and that evil will, indeed, never triumph over our God? Will we count the cost and decide that Jesus is worth the cost?

We live in an age of fear, whether fear from personal or worldly circumstances. We know the fear these dear women felt. We, like them, live and move and have our beings at the foot of the cross. This day, and every day, make the choice, out of your belief in Christ, to practice courage in the face of fear. Choose to trust that God knows what God is doing, that Christ is still present in our world, that the Holy Spirit is moving to bring peace to the world and to our lives. That’s the choice John, Mary, Mary, and Mary made. And in making that choice, they became “dear women.”

In the name of the Father, Son, and Holy Spirit; Amen.

Meditation at the Cross

O my people, O my church, what have I done to you, or in what have I offended you? I led you forth from the land of Egypt and delivered you by the waters of baptism, but you have prepared a cross for your Savior.

I led you through the desert forty years and fed you with manna; I brought you through times of persecution and of renewal and gave you my body, the bread of heaven; but you have prepared a cross for your Savior.

I made you branches of my vineyard and gave you the water of salvation, but when I was thirsty you gave me vinegar and gall and pierced with a spear the side of your Savior.

I went before you in a pillar of cloud, but you have led me to the judgment hall of Pilate. I brought you to a land of freedom and prosperity, but you have scourged, mocked, and beaten me.

I gave you a royal scepter, and bestowed the keys to the kingdom, but you have given me a crown of thorns. I raised you on high with great power, but you have hanged me on a cross.

My peace I gave, which the world cannot give, and washed your feet as a servant, but you draw the sword to strike in my name and seek high places in my kingdom.

I accepted the cup of suffering and death for your sakes, but you scatter and deny and abandon me. I sent the Spirit of truth to lead you, but you close your hearts to guidance.

I called you to go and bring forth fruit, but you cast lots for my clothing. I prayed that you all may be one, but you continue to quarrel and divide.

I grafted you into the tree of my chosen people Israel, but you turned on them with persecution and mass murder. I made you joint heirs with them of my covenants, but you made them scapegoats for your own guilt.